An Idea With Wings: The Buzz On Insurance Concerns & Commercial Drone Use

With any new technological advance come new risks and potential liabilities. Drones can be quite dangerous, both to people on the ground and other aircraft. The biggest concern for the FAA in drafting its regulations for commercial unmanned aircraft has been preventing drone collisions with other aircraft, especially commercial airliners. The liability in the event of such a collision could be catastrophic.

The FAA released proposed regulations for the use of commercial drones on February 18, 2015. With the standard procedures for notice and comment rule making, the public has sixty days to comment on the proposed rules before the FAA can put the rules into operation. However, industry experts expect the rules won’t be finalized for a year.

The rules will not require private pilot licensing or airworthiness certifications. Instead, drone operators will have to obtain a separate knowledge-based certification. While this makes the commercial use of drones much more economically expedient, it raises further questions about liability. Additionally, the rules will place limits on the size, speed, and altitude of commercial drones as well as requiring drones remain the line of sight of their operators. The rules will also require stricter rules for drone delivery operations, treating them similar air freight.

Businesses seeking to use drones can expect a number of complications in obtaining appropriate insurance depending on the drones’ intended use. Any drone with an attached camera raises concerns about privacy violations and how the information gained by the drone will be used and protected. The drones themselves can be vulnerable to cyber-terrorism and hacking/hijacking. Drones can also cause interference or be interfered with by radio frequency signals.

A number of insurance companies have begun offering policies for commercial drone use. These policies can vary wildly in terms of the amount and types of coverage offered. Given the limited amount of commercial drone use up to this date in time, both the insurance industry and businesses seeking to use commercial drones are doing their best to anticipate potential liabilities and protect themselves from them.

For those businesses considering the use of commercial drones, ECBM is here to talk you through potential pitfalls and work with you on crafting an insurance policy that fits your needs. 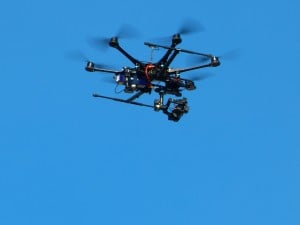