NLRB Decisions On Bargaining Units And What Businesses Should Remember 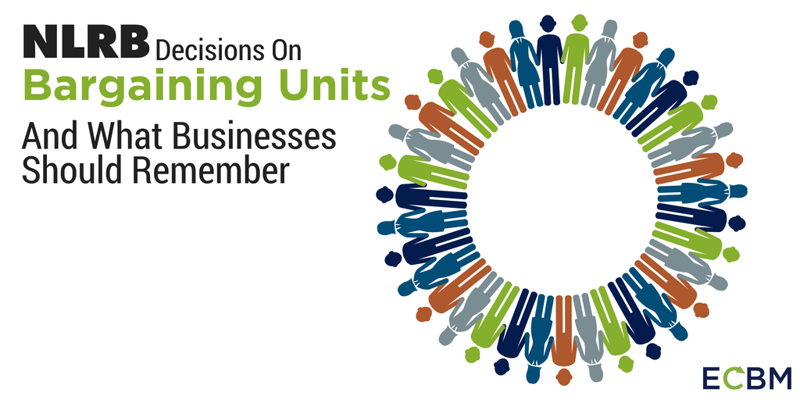 As part of a series of decisions issued by the National Labor Relations Board at the end of 2017, a new ruling overturned an Obama era policy related to defining bargaining units for unions.  The previous policy had represented a significant departure from National Labor Relations Board cases in terms of determining appropriate bargaining units when employees seek to unionize by creating an “overwhelming community of interest” standard.  The case announcing that previous policy, known as Specialty Healthcare, had sparked a good deal of controversy in the business world but had survived appellate review in eight different federal circuit courts.

A Community Of Interest Standard

Traditionally, the National Labor Relations Board has defined bargaining units by a community of interest standard.  The community of interest standard looks at a number of commonalities shared by potential bargaining units such as wages and hours, skill level, plant integration, and the employer’s organizational structure.  The NLRB often favored what was known as a wall to wall approach in certifying bargaining units for the purpose of unionization.  This meant that all the workers at a particular plant or factory would be part of a single union, making unionization more difficulty but collective bargaining significantly easier.

It is worth noting that the recent decision by the National Labor Relations Board overturning Specialty Healthcare does not inherently disfavor micro-units or favor employer-supported bargaining units.  Instead, its decision, in PCC Structurals, Inc. focused primarily on granting regional directors with broad discretion to determine appropriate bargaining units based on the facts of each case.  That means, though, that decisions on bargaining units will become significantly more unpredictable, leading to increased litigation costs for both sides in a unionization dispute.

Employers Should Be Paying Attention

It seems almost certain that the increase in litigation will begin with challenges to the NLRB’s new decision.  Specialty Healthcare survived appellate review in eight separate federal courts; however, that case was upheld under standards granting significant deference to the National Labor Relations Board.  With that same deference underscoring attempts to fight against the new NLRB decision, only time will tell if PCC Structurals, Inc. can also survive such a rigorous appellate fight.  Regardless of the long term outcome, though, companies should be alert to the fact that significant aspects of the labor market are changing as a result of a rash of new NLRB decisions.  Employers will have to pay close attention to ensure their compliance with the law and to maximize any potential for gain from the new decisions.