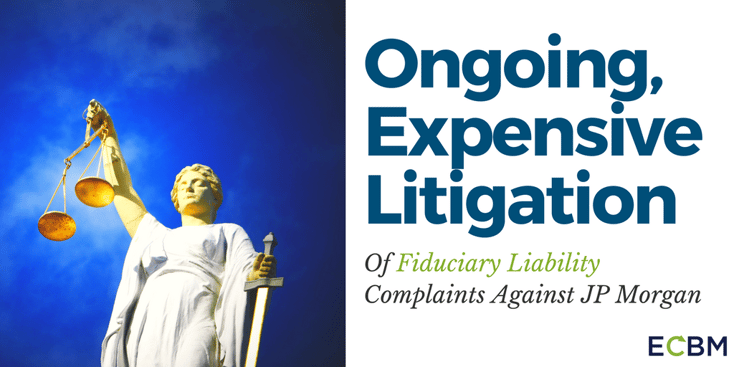 On November 7, 2017, JP Morgan settled a class action lawsuit brought by plan participants alleging the company made improper investments between 2009 and 2010 in one of the retirement funds offered to employers.  The allegations involved one of JP Morgan’s “stable value” offerings - plans meant to avoid risky investments. According to the lawsuit, the company failed to act prudently by using its stable value fund to invest in mortgage backed securities in the wake of the 2008 financial crisis primarily caused by those securities.  Over four hundred companies had employees with retirement assets in the specified investment funds.

The litigation began in 2012 and took over five years to resolve.  Class certification only occurred in March of 2017; the high costs of class action litigation often prompt settlement shortly after class certification.  (Interestingly, employees of Caterpillar Inc. who had stable value fund investments in JP Morgan were excluded from the class due to a separate settlement reached in a lawsuit filed directly against Caterpillar.)  Discovery in the case involved over one hundred thousand documents approximating one million pages that the parties had to pay lawyers to review.  The settlement ultimately involves JP Morgan paying class members $75 million, with as much as $25 million of that going to plaintiff’s attorney’s fees.  Those amounts do not include what JP Morgan had to pay their own attorneys or the costs of producing so much discovery.

Fiduciary Responsibility Continues To Be A Problem For JP Morgan

JP Morgan continues to face a host of other lawsuits related to its management of ERISA plans, including several filed in 2017 by its own employees for fiduciary breach of duty related to its own 401(k) offering.  Several of these pending lawsuits involve allegations of self-dealing due to the investment of retirement funds in JPMorgan products or products of one of its affiliates, while others focus on excessive fees - an increasingly common argument in ERISA lawsuits.

What Companies Should Know To Be Able To Protect Their Businesses

The Board of Directors of JP Morgan have been named as co-defendants of the company, a useful reminder that the failure to monitor other plan fiduciaries can make an employer’s board members and executives personally liable for the resulting damages. Kevin Forbes, Vice President at ECBM says, "This is particularly important to consider this risk for businesses because fiduciary violations are often excluded from Directors and Officers Liability Insurance policies, though some companies do offer Fiduciary Liability Insurance to cover these violations."  If history is any indication, these cases will not be resolved until the next decade and only after each side accrues millions of dollars in attorney’s fees.